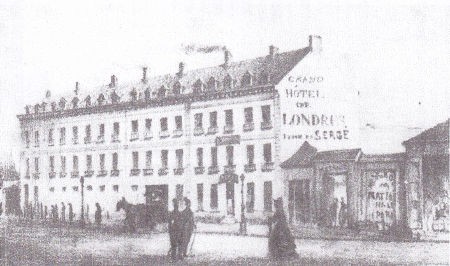 The immense Le Londres Hotel (50 rooms!) Is built towards 1837 for Mr. Brossier, who previously held the hotel business of the Ecu of Brittany and who will succeed Jules Budan (who will build his new hotel ... The Budan where took place the current Crédit Mutuel on the Loire ...) and then Mr. Sergé. The famous and miserly Jean Niveleau takes a share of 10 000 francs in this investment. This imposing building, here coarsely lithographed by Jehan Merchant, is for a long time surrounded by low houses and courier warehouses. Which allowed to see from afar his original name on one side: "Le Grand Hotel de Londres". Building and sign unchanged since more than 180 years, it is the oldest hotel in the city still in activity. Only the entrance door has been redone in the 1900 taste with the addition of a winter garden in Eiffel structure (current reception room of the hotel). 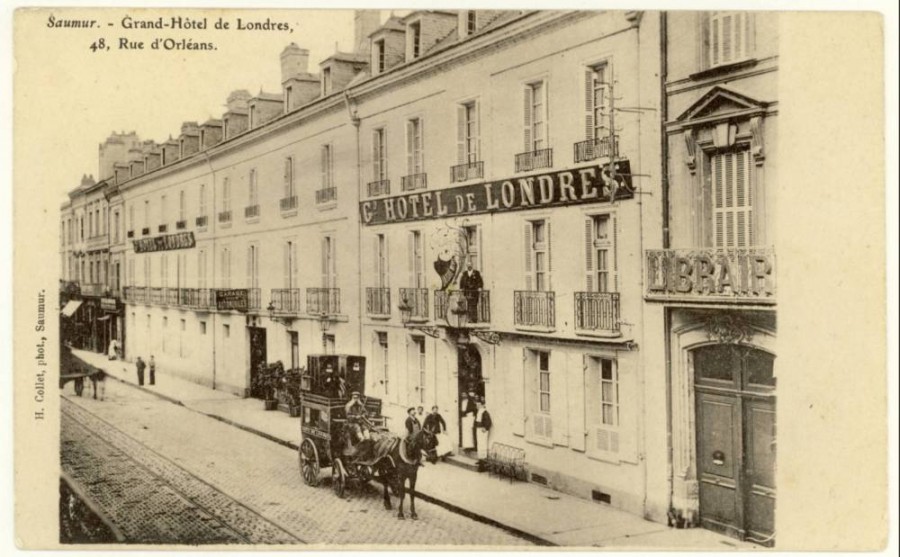 The Hotel Le Londres bears witness to what was Saumur at the Belle Epoque, a social event particularly appreciated by a wealthy Parisian clientele.

In Anjou, there are then few hotels to compete with The Grand Hotel de Londres. The tourist guides and some testimonials collected are full of praise for "this establishment which has all the conveniences of a Parisian palace".

While this claim may be somewhat outdated, it is true that, unlike many of its competitors, Le Londres Hotel offers its customers "water and gas on all floors, a carpool service to diligently to the train station "and, at the height of modernity, a telephone. This is probably why the Automobile Club de France has made, very quickly, one of his favorite addresses in the region.

Le Londres Hotel, whose baptismal name is a tribute to the then most prodigious city of the "civilized world", is the rendezvous for the families of the upper middle class and the French aristocracy who came to visit the son who performs, as a cadet, his military service in the very select School of Cavalry of Saumur. 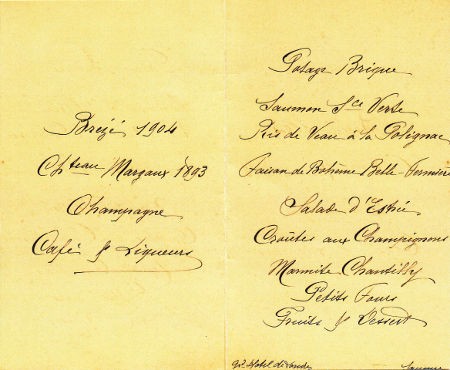 At the beginning of the XNUMXth century

This menu of February 13, 1914 testifies to the opulence and gluttony of this period.

July 1914, Saumur is the scene of a tragic fact-miscellaneous. Legagneux, one of the pioneers of aviation, just died after his plane crashed in the Loire. Many are the brethren coming to pay him a last tribute in his room at the Grand Hotel de Londres, where a chapel was erected. This is how Legagneux enters the legend and the Le Londres Hotel in history.

During the Great War, the establishment was transformed into a convalescent home for wounded officers at the Front. Le Londres Hotel is losing some of its beauty.

A page of history has just been turned. This hotel, which has become a real institution after more than a century of existence, bears witness to what Saumur was at the end of the XNUMXth century: a social gathering popular with all of Paris.

These invoices from the 1910s and 1920s bear witness to the fact that the Grand Hôtel de Londres belonged to the Lacote-Nivet and then Lacote families. 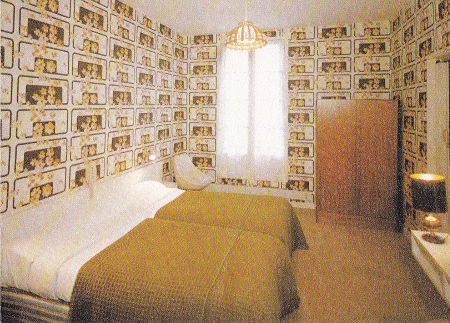 The Grand Hôtel de Londres taken over by the family Leseuil in the 60 years for his children (because they also have the Hôtel de la Paix rue Dacier) no longer has a restaurant, which forces him to give up his floor. walk on the street. He loses his qualifier "Grand". 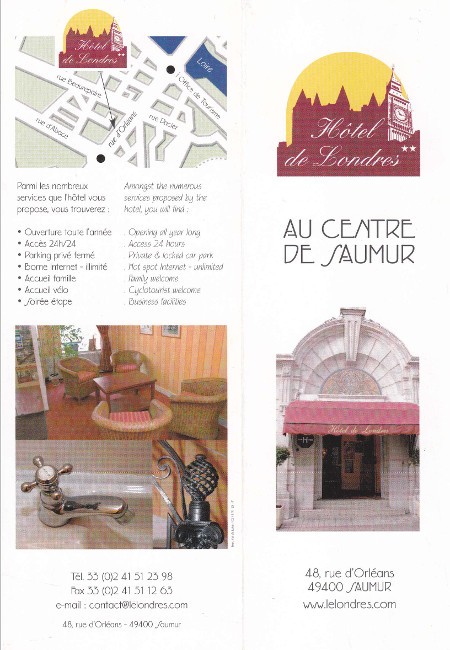 Takeover of the hotel

Le Londres Hotel then passed into the hands of the Hayot, Giot & Delanoe families before being bought by the current owners: Charlotte & François CHOVET in July 2005.

After 10 years, the goal is achieved: total renovation of the establishment both in terms of rooms and water, gas and electricity, creation of 2 aparthotels, obtaining the 3th star and ... installation a magnificent marquise above the entrance, as in the early twentieth century. They will take the opportunity to reinvigorate the name of the hotel in "Le Londres", which allows to add "Hotel & Apartments".

"In order to establish our presence on the street, we had to mark the entrance to the establishment". After 6 years of reflection and with the support of the architects of the city and of the buildings of France, François Chovet was able to launch this achievement thanks to 2 “local and passionate companies with exceptional know-how”: Adrien Bredy, roofer and Anjou ironwork . A real challenge for Adrien, installed in Chacé, who completed his training with the Compagnons du Devoir: “It is one of the only works in this glass roof principle. There are a number of difficulties especially with the double curvature. In fact, it's a bit like an airplane propeller. ". Objective achieved, marquise posed in April 2015! 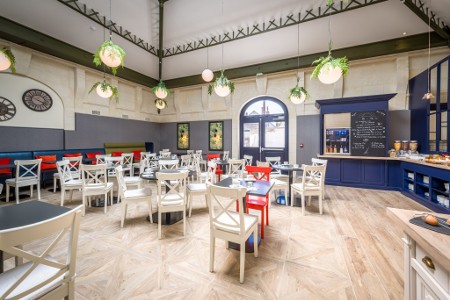 The expansion of Le Londres

2016: after 3 years of long discussions, another dream takes shape in London ... with the purchase of 550m2 on the ground floor, the owners will be able to continue to restore the luster of yesteryear to this beautiful lady of London: creation a receptive of 150m2 with reception, reception room and seminar room, transformation of the former Winter Garden into an Eiffel structure in the breakfast room, addition of a south-facing outdoor terrace, creation of 4 rooms with private terrace including 2 with access for people with reduced mobility and launch of Le Carré du Londres in collaboration with the chef Jean-Pierre Kausz: a concept of catering in jars for the brumes and the customers of the hotel ... 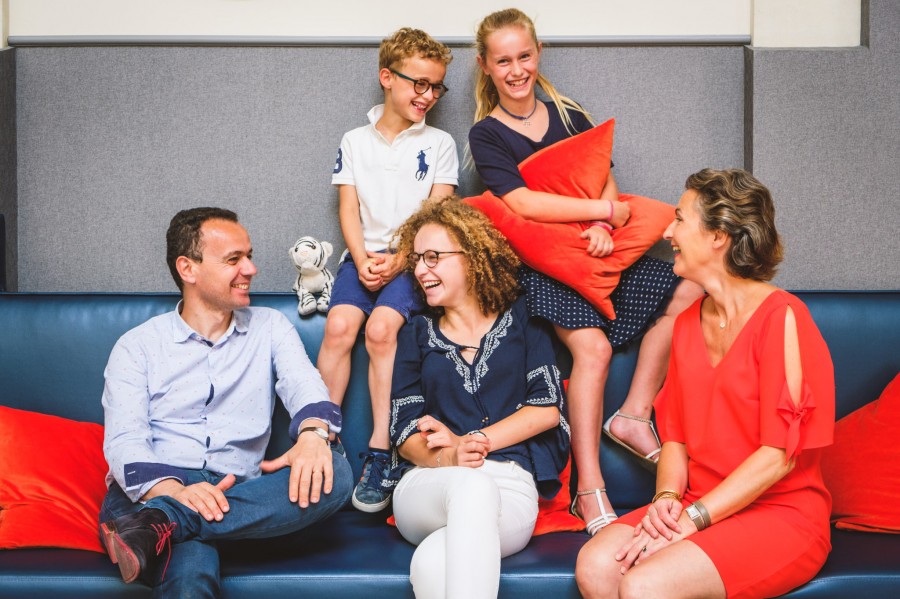 12 years spent in Saumur and Le Londres have enabled Charlotte & François to be fulfilled and happy to always welcome as many customers and offer them even more comfort. Family development also with 3 beautiful children (including 2 born in Saumur) who can not say otherwise without lying the pictures!

The ORIGINALS CLUB offers you exclusive benefits and services. Free and immediate membership.

A new dematerialized loyalty program that values ​​the human dimension, the local culture and the quality of your hotel experience.

The ORIGINALS CLUB offers you exclusive advantages and services and allows you to accumulate points to transform your stays into real experiences: redeem your points to pay for your stay, hotel or external services, benefit from a special member rate or leave with your bottle of Moët & Chandon Champagne.